In July, 2015 America witnessed a drive by shooting at a Military recruiting station in Chattanooga, Tennessee. The murderer then drove 7 miles away and attacked a US Naval Reserve Center where he was eventually killed by Law Enforcement. Five lost their lives that day and others were injured.

I’m not going to identify the mass murderer or even utter his name. The FBI’s investigation revealed he was inspired by international terror groups. The same terror groups are inspiring mass murderers today to target churches, synagogues, or any places of religious worship. The FBI has issued a Holiday warning. 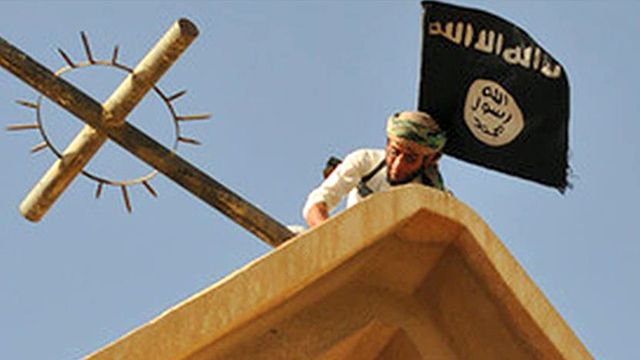 There are some similarities with the Military policies in place at the time of the murders and the current Texas Occupations/ Private Security Act section 1702. Military policy strictly prohibited Military personnel from being armed while working at recruiting stations in the US. The current Private Security Act strictly prohibits Christians from being armed while performing any security functions at church. This means locking a door, walking the parking lot or standing at a door for the purpose of keeping a watchful eye. The very men and women who are concerned about their safety and the safety of their church family are the ones who must disarm to be in compliance with Texas Law. Yes, that means anyone who is “Licensed to Carry”, and every retired Peace Officer.

Two points I want to make clear. First, the murderer was stopped when another person showed up with a firearm. Second, every person who lost their lives was unarmed. There are only two ways an active murderer will stop. Either someone will stop them, or they will stop when they’re finished!

There is a solution: Texas Representative Matt Rinaldi of Dallas understands that the tragic loss of life does not have to be the deciding factor that overturns current Texas Law. Rep. Rinaldi has introduced HB421 that will allow Christians the flexibility to be armed and defend themselves. The passing of this bill will need your help. It will take the voice of thousands of law-abiding Christians and Gun Owners to take this from conversation to LAW. Everyone must contact their Representatives and Senators and encourage them to support HB421 and let them know you will be following the progress of the bill. Below is a lookup site that will take you directly to your legislator’s email and phone number by zip code.

A BILL TO BE ENTITLED

Relating to the exemption from the application of the Private Security Act of certain persons who provide security services on a volunteer basis at a place of religious worship.

BE IT ENACTED BY THE LEGISLATURE OF THE STATE OF TEXAS: SECTION 1.  Subchapter N, Chapter 1702, Occupations Code,

is amended by adding Section 1702.333 to read as follows:        Sec. 1702.333.  PLACE OF RELIGIOUS WORSHIP; CERTAIN VOLUNTEERS. This chapter does not apply to a person who is providing volunteer security services on the premises of a church, synagogue, or other established place of religious worship.

A volunteer security patrol made up of church members would generally require licensing under the provisions of Section 1702.108 or 1702.222, regardless of whether any compensation is received as a result of the activities.  The only exception to licensing provided by the legislature for nonprofit and civic organizations is found in Section 1702.327, which applies specifically to nonprofit and civic organizations that employ peace officers under certain circumstances and would not be applicable here.

However, there is one exception to licensing under Chapter 1702 provided by the legislature that could arguably apply, which can be found in section 1702.323 (“Security department of Private Business”).  This exception would allow volunteers to provide security services exclusively for one church, as long as they do not carry firearms and as long as they do not wear “a uniform with any type of badge commonly associated with security personnel or law enforcement or a patch or apparel with ‘security’ on the patch or apparel.”  See Tex. Occ. Code §1702.323(a) & (d)(2).  Thus, the wearing of a uniform or any apparel containing the word “security” would subject them to the licensing requirements of the act 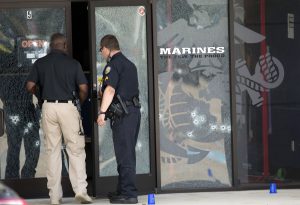 Take a closer look at this picture.  Do you see how all the bullet holes are basically below the waist?  People instinctively crouch low, climb under desks when attacked.  The pattern of the bullet holes show that the offender was sweeping the entire front of the building to maximize damage and casualties.

This murderer was committed!  He planned this, he prepared for this and he executed that plan.  This is the challenge for all houses of worship and all denominations.  How does your level of commitment to protecting your church stand up to these jihadist’s level of commitment? 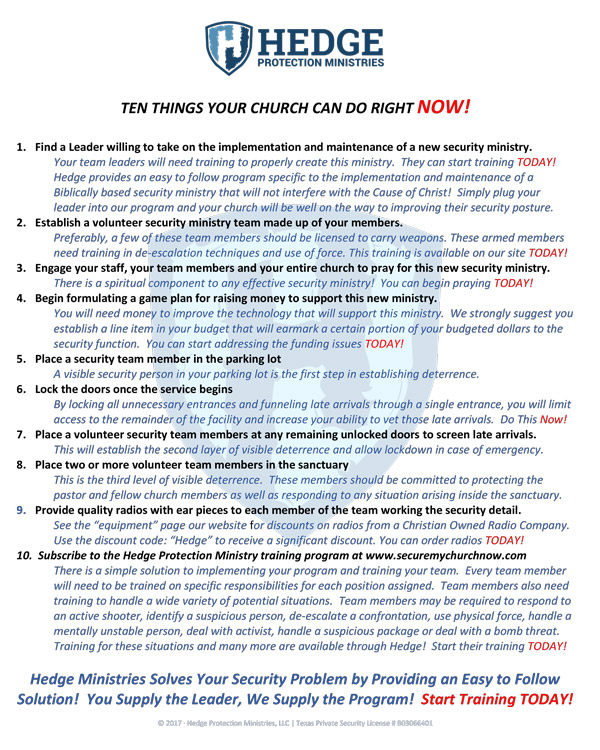